The company started in the 1990’s by commercial fisherman Andrew Edgerly to effect repairs and fabricate gear and rigging for the fleet fishing out of Kodiak, Alaska with the long term goal of becoming a custom aluminum boatshop. At that time in Kodiak, aluminum skiffs were typically built by forming a chined hull from plate and then framing to the skin. The plate is self fairing and, in the right hands, this is an effective way to create a functional skiff. A big drawback is that there are no accurate offsets of the hull that can be used for the design of each successive vessel. Also, it’s impossible to calculate hydrostatics for a vessel that is taking shape on the shop floor. 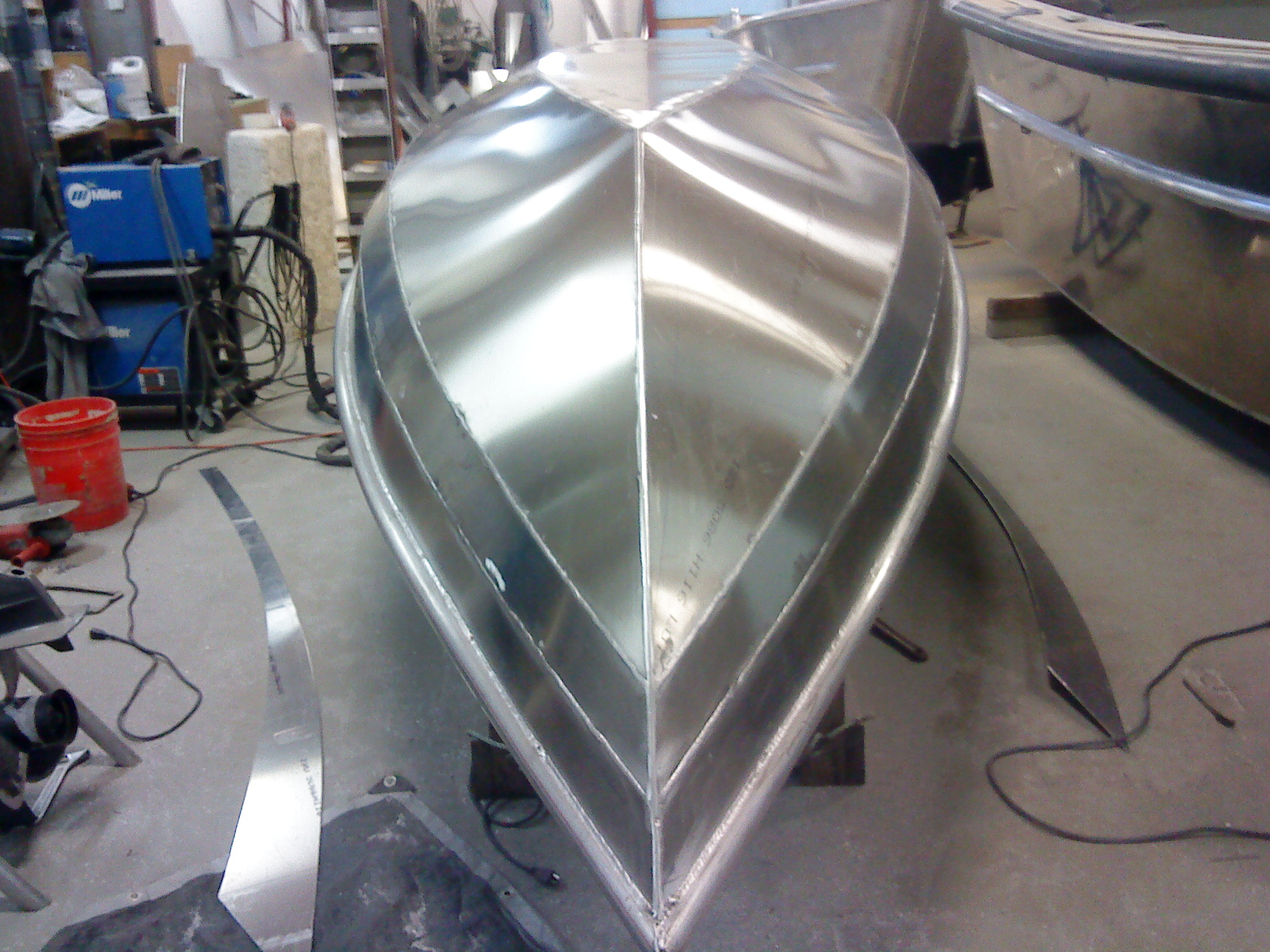 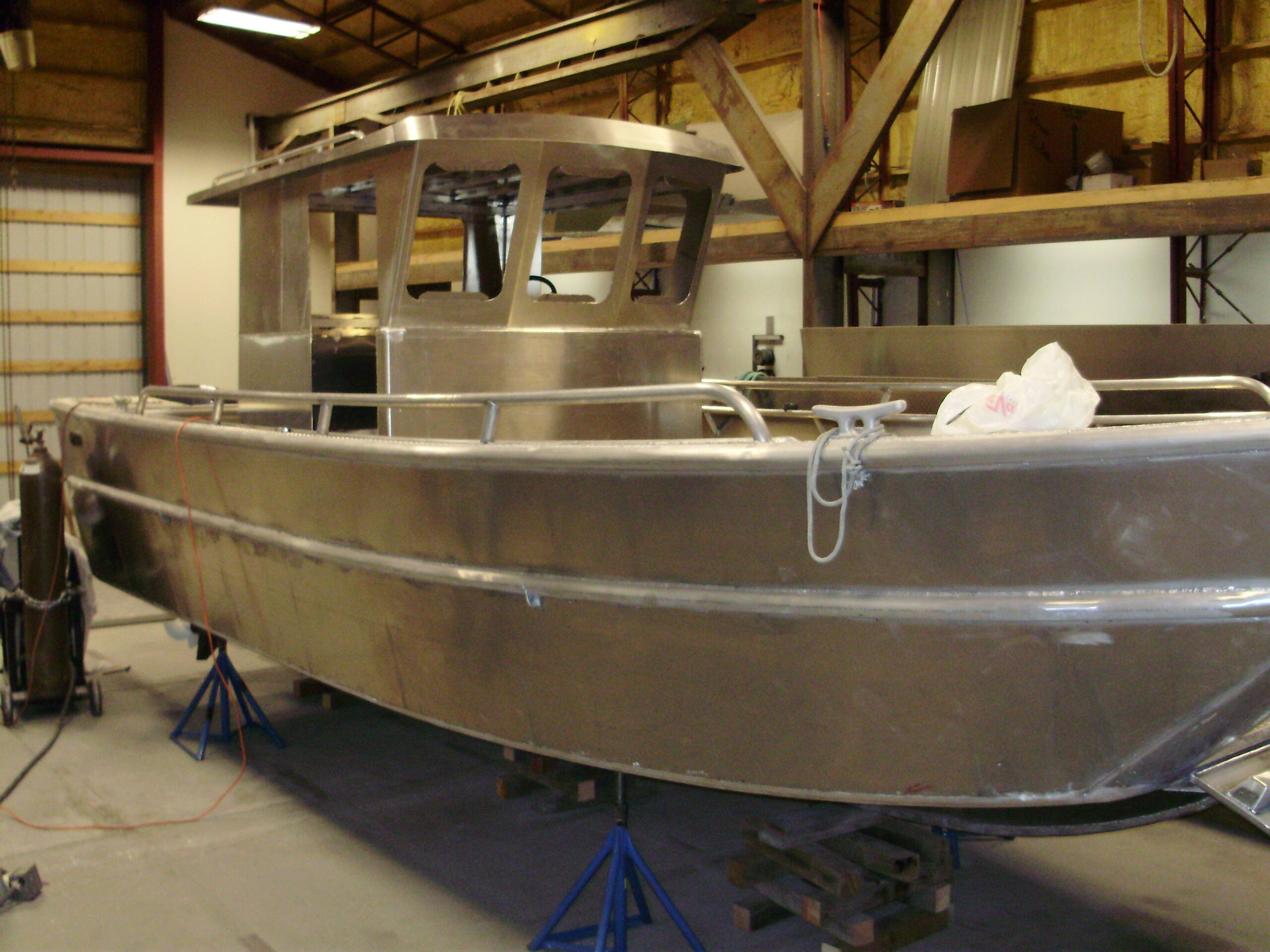 By using Autoship, Edgerly was able to model 3D hulls from developed surfaces. Those developed surfaces and select frames were easily exported to Autocad for dimensioning, cutting and assembly in the shop. When the entire process happens under one roof, drafting time is reduced because it minimizes the amount of information that needs to be put on each drawing. Working in the other direction, the fabricating shop has CAD as a sketchbook to graphically solve challenges on the shop floor. The result is a streamlined process that allows a  two man shop to effectively produce custom boats up to 36′ LOA.

The design/build process has matured and now depends almost exclusively on numerically cut parts for hulls, structure and decks. Three design lineages have evolved from the demands of the purse seine fleet; set net fishermen, lodge owners and sportsmen.

Chined hulls are easily modified within Autoship. Blueyodel is typically asked to build a boat from the three basic designs listed above. Each hull can be stripped down to control curves which define the hull: sheer, multiple chines and the centerline. Using Autoship‘s scaling tool the control lines are adjusted to the rough desired dimensions and then used to develop the surfaces which lie between them. The control lines are further manipulated for the desired shape as the developed surfaces are easily regenerated.

Arranged into a hull, a full hydrostatic report can be generated for any waterline at any time and a spreadsheet is available in Autoship showing the area and weight of each surface for the material specified by designer. Any surface in the finished boat that can be defined by a buttock line, waterline or station such as transverse and longitudinal framing, bulkheads, tanks, flat decks etc. can be exported at this point for final drafting in AutoCAD.

In a simple boat that is being built in an adjoining shop this is a far as the design needs to go. If the designer is required to go back in the design spiral and modify the hull, the only dependent lines are plate trim lines at the transom and sometimes at the sheer, thereby the effort to make changes is less daunting in a software program, like Autoship, than in a fully drawn model. Less effort means greater flexibility in design.

For more complex boats, Blueyodel has an extensive toolbox in Autoship to create curves and surfaces. The surfaces are usually controlled by curves. Most useful for sheer, chines and centerline are free curves which are edited, as most curves, using control points to massage the curve and edit points for specific location. Autoship will create a developed surface between each pair of these lines. In addition to free lines some commonly used line tools at Blueyodel are cambered lines which can be extruded along a vector to create a deck or used as a pattern and swept along a guide line to create a deck with sheer. Arcs are often used extruded along a vector for anything that will be built out of rolled plate or for pipe sections such as rubrails. Autoship has a library of foils which are useful to extrude keels.

At Blueyodel the reward of boatbuilding comes from collaborating with working boat owners who know what they want. The versatility of Autoship at scaling and re-proportioning previously built hulls gives owners the chance to be directly involved in creating their own custom boat and in most cases each project is anticipated with excitement by the builders and owners alike.